The Lord keeps his promises, including the promise he kept in the birth of St. Giles, namely that he works good in all things for his people. Thus from a divisive church split came a new and vibrant church. Blanton Belk left Grace Covenant Church in 1937 to pursue his passion for the renewal being fostered by the Oxford Group Movement. Soon he was invited by many of his friends and former members to help them start a new church, and to serve as pastor. That church is St. Giles. Land was secured in 1940, and the first building was dedicated in 1941, with others to follow.

The zeal of St. Giles’ founding also became the most prominent characteristic of her common life, drawing those across the years who wanted to pursue Jesus headlong. This zeal has shaped St. Giles’ worship, education, mission, and ministries in innumerable ways.
​
Earl Morey succeeded Blanton Belk as pastor in 1959.  His pastorate was shaped in large part by another renewal movement, the charismatic renewal.  Beginning in the late 60s, this movement of the Holy Spirit both energized St. Gileans and brought great controversy, thankfully this time without a church split.  This renewal movement gave St. Giles a distinct identity, even as she continued in the character of her birth years before – the headlong pursuit of Christ.

Pastoral leadership continued to build upon and foster such Spirit empowered living with Louis Skidmore (Skid), who first came as an associate pastor in 1972, and later became pastor.  Randy Bremer added his energies and gifted teaching to this continuing renewal in 1987. Keith Hill became the fifth pastor of St. Giles in 2007, and under his leadership St. Giles continues in her headlong pursuit of Jesus in the power of the Spirit.

Who was St. Giles? 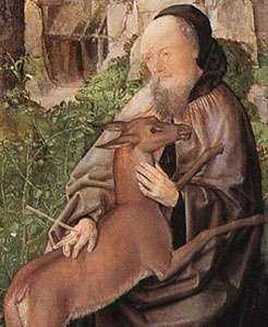 The Roman Catholic Church remembers St. Giles as a 7th century Greek, born into a wealthy noble family. He left his fortune to work with the poor, and because the Lord worked miraculously through him, he gained quite a following. However, he preferred a life of contemplation, and went to France, where he became a hermit in a cave near Nimes. Legend says that he lived so meagerly that the Lord sent a deer, whose milk sustained him. Once a hunter’s arrow, aimed at the deer, hit Giles instead, leaving him with a crippled leg.

Despite his desire to live in solitude, Giles’ piety and God’s miraculous works through
him gathered a following of people. The king, admiring his faith and works, built a monastery in ​his honor. Giles became the first abbot of the monastery of St. Gilles-du-Gard, which became a Benedictine house. After Giles’ death it became a shrine and a place of pilgrimage. Because of his own damaged leg and his care for the poor, he was seen as the patron saint of the crippled and of beggars.

This brings us to the church. The original was built in St. Giles’ honor by monks in Edinburgh, Scotland. Begun in the 12th century, it was added to for centuries, making it the landmark cathedral that it is today. Its most famous pastor was John Knox, who in the 16th century was the leading voice in the Scottish Reformation. St. Giles Church thus became the mother church of Presbyterians. It was for this historic place of worship that our church was named.

May it be that the devotion to the Lord, service to the poor, and empowerment by the Holy Spirit that led the Catholic Church to deem Giles a saint would be found in full at St. Giles Church, together with the passion and courage of John Knox and his partners, who launched our branch of the Reformation.